The Finca Palma Dorada encompases an area of approx. 35 hectares in the middle of the Ecuadorian Amazon region. Here, together with the indigenous people of the rainforest, we have managed to combine the sustainable production of cocoa for exclusive chocolate, the preservation of the jungle, commercial forestry, tourism and the cultivation of a variety of vegetables and tropical fruits.

We started operating on the finca in December 2016 as an alternative to gold mining in the region and to counter the exploitation of the environment as well as local indigenous people.

The Finca Integral Palma Dorada is located in the municipality of Tujana, province of Napo in eastern Ecuador. The soil in this region is characterized by an exceptionally high gold content of 250 millimeters per cubic meter (0.25 ppm) andareas with a gold concentration excessing 500 millimeters of gold per cubic meter (0.5 ppm). 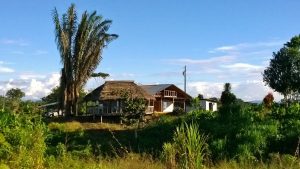 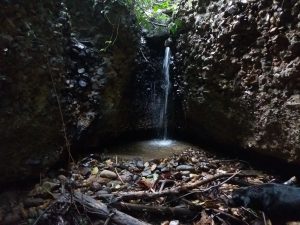 The geology of the Finca Palma Dorada provides a spectacular and very rare insight in the history of the Ecuadorian Amazonas. Our soil is one of the best in the region, making our products even more delicate, exclusive and special.

An observation of the geology of the region shows that the lands of the Finca Integral Palama Dorada were submerged under the Pacific Ocean when the rivers flowed from the Guayana heights about 48 million years ago during the Napo uplift and when the rivers started to change their course, beginning to flow from West to East.